During the last weeks of March a small shock went through the Shops of Engel & Völkers Mallorca Southwest. No, it was not related to the Covid-19 confinement and the effects this was producing globally and locally. During those days we discovered a mistake. The final official figures of the Q4 real estate transactions of 2019 had arrived and it was time to adjust the estimations based on historical records to the final numbers just received.

To the surprise of all of the experts involved in elaborating the yearly Engel & Völkers Mallorca Market Report, the real estate market in Mallorca Southwest had experienced phenomenal growth in the last three months of the year. Following the trends from past years, it was expected that the Mallorca Southwest real estate market would receive a small downwards adjustment compared to the previous year and we were therefore not prepared for what we were about to see. 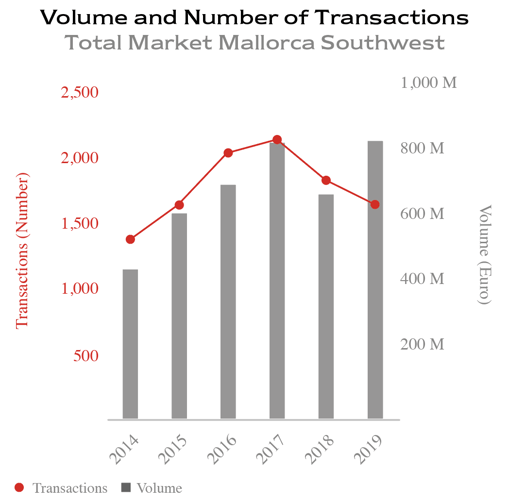 Exactly at the same time as international economic experts were speculating on the impact of Covid-19 on the global economy and what shape the recovery would take, we were in front of a perfect V shape in the transaction volume of Mallorca Southwest between the years 2017 and 2019.

This was not only a surprise because it broke the analytical and statistical models of previous years, it was even more astonishing that the transaction volume should rise again to 2017 results when all experts were considering that the market had peaked in 2017 within Mallorca and most places of the world.

So what exactly happened? In a first analysis we identified New Folies, a large real estate project located in Andratx that had gone to notary completion in the past days 2019. However, this accounted for less than 50% of the 200 M € variation between the estimates and final results. Taking a further look at the figures, it became visible that the average sales price completed in front of Notary in Mallorca Southwest had risen by 44% from 2014 to 2019. An additional surprise was that in spite of 25% less transactions the total turnover of 2019 matched that of 2017.

The Municipalities of Andratx (population 11.200) and Calviá (population 50.500) accounted for a total real estate transaction value of 820 M € in 2019. This is the highest per capita transaction volume of the Balearic Islands. Andratx leads this statistic with 22.300 € transaction volume per capita, which is ten times higher than that of the capital city of Palma. Andratx does not count with a significant hotel infrastructure as Calviá, but it has reached an extraordinary level of specialisation and craftsmanship in producing superior real estate. It’s brand value has gone beyond the borders of Europe and Andratx is now highly acclaimed in the international real estate market.

Since the end of the 70’s the coastline municipalities of Calviá and Andratx placed large efforts into developing residential areas in locations with little or no agricultural value, but with superb views and growing facilities, golf courses, schools, marinas and infrastructure at the doorstep. From the very beginning, these residential areas were targeted to European second homes owners, who since then, have remained extremely loyal to Mallorca.

For the past six years the availability of further building land in Mallorca Southwest is at minimum level. In fact, the only noteworthy extensions of available land in Calviá are zoned for social housing. Andratx declassified its last possible urbanisation as far back as 2008 and turned that urban land area into an unbuildable protected rustic zone. The roadmap for luxury real estate will consist of refurbishing or demolishing existing homes that have come to the end of their life cycle in order to construct a new property on the same spot, without consuming any further territory. This is clearly to the benefit of the beauty and protection of the mallorcan countryside and a strong price driver that will lay the foundation of a very solid market.

The start of 2020 continued to prove that Mallorca property is a refuge for capital at times when the markets become volatile. The outbreak of Covid-19 affected stock markets worldwide and the effect upon the demand for luxury real estate in top locations in Mallorca Southwest was immediate. Our additional surprise during those weeks and even now is that purchasers do need to be persuaded, and have an excellent understanding of the market and are not at all speculating with their acquisition. It is always a life improving investment into what is widely considered as a safe haven, where it is clear that prices will not tumble even in adverse situations.

This trend has continued until today and our forecast is that it will have continuity over the coming months. The 2020 final results of the real estate market in Mallorca will of course take a toll after two months of strict lockdown and at least three months of closed international travel. Nevertheless, this economic sector will keep the Balearic Islands going even if the tourism industry is severely hit and in the process of redefining itself on a global level.

Even in a moderate, or partly negative scenario of the international solutions towards stopping Covid-19 it is more than likely that the real estate market in Mallorca Southwest will strongly rebound in 2021, drawing the next letter in the alphabet, the W.

The "Cédula de habitabilidad" is a document that proves that a building constructed for residential purposes meets the...

With a third of the world’s population in confinement due to COVID-19, an increased global appreciation for the safety...